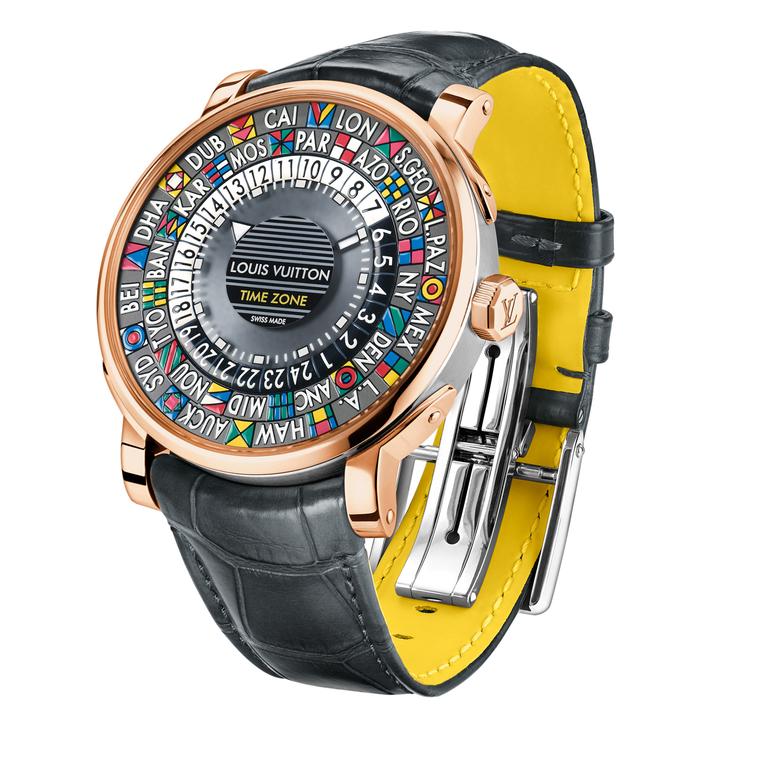 When Louis Vuitton first presented the Escale Worldtime watch at Baselworld in 2014, it stood out as very different approach to luxury watchmaking.  And that is no surprise as the bright colours on the dial were inspired by the initials and markings on early Vuitton steamer trunks, designed to make luggage stand out from the crowd.

In the late 19th century, thanks to the arrival of steamships and trains, travel became a fashionable and stylish activity. In the scramble played out on chaotic quays and railway platforms around the world, Louis Vuitton offered its globetrotting customers the possibility of marking their luggage with eye-catching bespoke monograms, crests, stripes and geometric motifs. Ever brighter colours and daringly distinctive yet functional markings helped growing numbers of travellers and their porters identify their luggage at a glance. And, as is usually the case, function-led design tends to have a long shelf-life, its initial purpose shining through the decades with surprisingly contemporary colours and clean lines.

When the first Escale Worldtime took the lexicon of bespoke trunk markings and shrunk them down to the proportions of a watch dial, the bright colours of these functional markings found a new lease of life.  This year sees another twist as the dial, above, takes on a blue background hue. The distinctive markings are hand-painted at the Maison’s La Fabrique du Temps in Geneva, where 38 different hues are meticulously applied using a fine-tipped brush to create the appealing little cushions of clearly delineated colour. Every dial takes 40 hours of work that is later dried in an oven.

But the dial is just the start of the complexity that lies behind the colourful façade. The Escale Worldtime is an evolution of the classic world time function that allows you to easily read the time in 24 different cities around the world. The black triangle, tipped with a yellow arrow, is the only fixed element on the dial. Around this central marker rotate three discs: the outer dial indicates the city, followed by day and night time hours, while the innermost displays the minutes. Controlled by a single crown, the Escale Worldtime brings a welcome ease of use to the traditionally complex world time function. Powered by the LV106 automatic calibre, the watch has a power reserve of 38 hours and has been developed and assembled by La Fabrique du Temps in Geneva.  The case is made of lightweight titanium with a white gold bezel, lugs and crown.

The Louis Vuitton Escale Time Zone, above, brings the same travel-inspired motifs to another watch for voyagers with a more accessible price point. Time can be read in two separate locations from the 24 displayed on the outer disc. A central hand in the form of a stylised globe indicates the hours. The dial is rubber-stamped by hand, one colour at a time, while the case is made of pink gold and houses the automatic Calibre LV87 at Vuitton’s La Fabrique du Temps.

The most playful of the new trio is the Escale Spin Time, below,  which fuses the multi-coloured dial and case of the Escale with Vuitton’s fun Spin Time function. Miniature cubes rotate each hour to reveal the time, swapping a hand-printed motif for the appropriate numeral.

Each cube bears three markings: the hour numeral and an am and pm colour motif, meaning that the dial of the watch is a constantly changing chromatic kaleidoscope. The LV77 automatic Calibre created by the firm’s Swiss workshops is housed in a brushed titanium case with white or pink gold bezel, horns and crown.