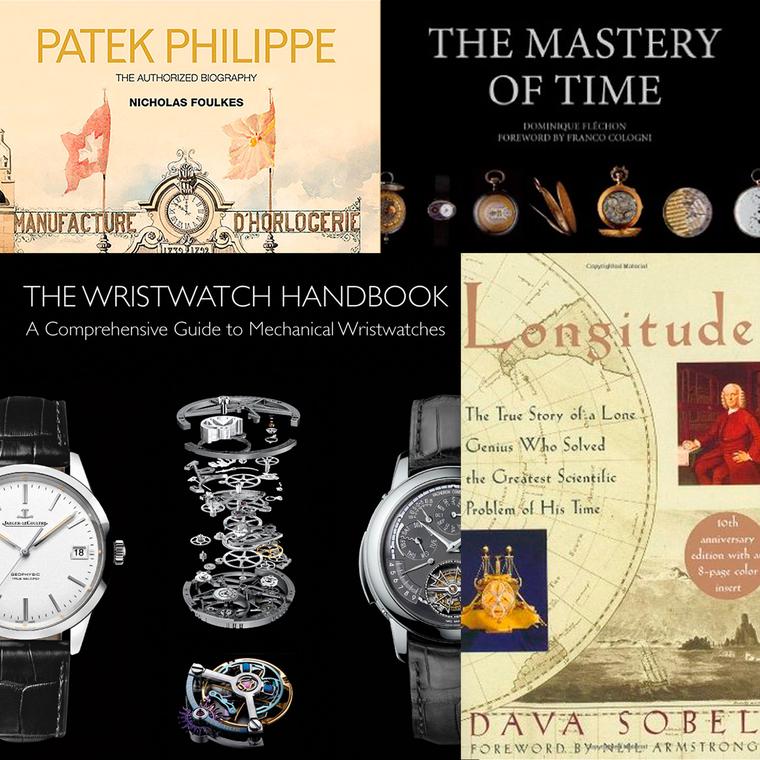 The Wristwatch Handbook: A Comprehensive Guide to Mechanical Wristwatches

This is the bible for serious watch lovers and collectors who want to get their head around some of the more complex mechanical concepts without being totally overwhelmed. Ryan Schmidt’s monumental book takes you from the basic principles to the most complicated derivations of watchmaking and is designed to “to be a map and compass for you own personal journey”, without being cryptically elitist or pretentious. The language is straightforward, entertaining and engaging, and the fabulous photography brings the text to life.

From the exploration of the internal anatomy of the wristwatch and how all the separate parts conspire to make it tick in the first section – exploring power, transmission, distribution and regulation – the second section examines different categories of complications, from astronomical complications like the simple Moon phase to super complications and downright oddities. Declaring his book “brand agnostic”, it is refreshing to find 470 colour photographs of watches from over 90 brands instead of the round-up of usual suspects that tend to dominate the arena. In a nutshell, Ryan Schmidt is your trusted guide to the cosmos of horology.

Longitude: The True Story of a Lone Genius Who Solved the Greatest Scientific Problem of his Time

This bestseller, now in its 10th year, revolves around the figure of John Harrison, a self-taught Yorkshire carpenter and clockmaker who resolved “the longitude problem” and changed the course of horology and navigation history with his invention of the maritime chronometer. Although we take it for granted, the difficulty of determining longitude – establishing how many degrees East or West a ship has sailed, an obsession of scientists from Galileo to Sir Isaac Newton – resulted in sailors getting lost at sea and countless naval disasters. The Scilly naval disaster of 1707, in which four warships of a Royal Navy fleet sunk off the Isles of Scilly with the loss of 1,550 sailors, helped precipitate the Longitude Act of 1714 in which Parliament offered a prize of £20,000 “for a method to determine longitude to an accuracy of half a degree of a great circle”. The race was on, but as Sobel points out: “In the wake of the Longitude Act, the concept of ‘discovering the longitude’ became a synonym for attempting the impossible,” and resulted in some amusing hair-brained experiments, “involving the sound of cannon blasts, in compass needles heated by fire, in the moon’s motion, in the sun’s elevation and what-else-have-you…”

The Mastery of Time: A History of Timekeeping, from the sundial to the wristwatch: discoveries, inventions and advances in master watchmaking

Have you ever wondered how man managed to encapsulate the measurement of time in a device small enough to be worn on the wrist? If so, this impressive 450+ page behemoth, an A-to-Z of timekeeping from its origins to the present day, is your book. Charting the technical resources invented by man to measure time, from the ancient gnomons to the atomic clock along with the major breakthroughs in the science and art of horology, Dominique Fléchon puts timekeeping into historical and social context.

Beyond the fascinating chronology of technological advancements in horology, Fléchon exposes the intimate relationship time has played in man’s everyday life, from the observation of the heavens and deciphering the cycles of nature to the peal of church bells organising medieval man’s daily labours. Fléchon also highlights the symbiotic nature of timepieces evolving in conjunction with other cutting-edge sciences, from man’s navigation of the oceans to his exploration of outer space. Organised in six chapters, Fléchon’s tome is accompanied by a detailed glossary of watchmaking terms and a foreword by the most erudite man in the watchmaking sphere, Franco Cologni.

Everything you wanted to know about Patek Philippe is finally here in Nicholas Foulkes’ official biography of Switzerland’s most revered watch brand. Drawing on interviews with the company’s current owners – the Stern family – Patek Philippe staff, watchmakers and even the widow of watch designer Gérald Genta, who designed Patek’s legendary Nautilus watch, Foulkes also had the rare privilege of accessing unseen documents from the company’s archives to weave his colossal 544-page biography. Divided into 25 chapters, it is richly illustrated with over 600 images that trace the evolution of this Genevan watch brand. Read up on founder Antoine Norbert de Patek’s early life in Poland as a young cavalry officer fighting in a doomed uprising, his exile, his life in Geneva and his partnership with watchmaker Adrien Philippe all the way through to the 1932 purchase by the Stern family who have perpetrated the legend.