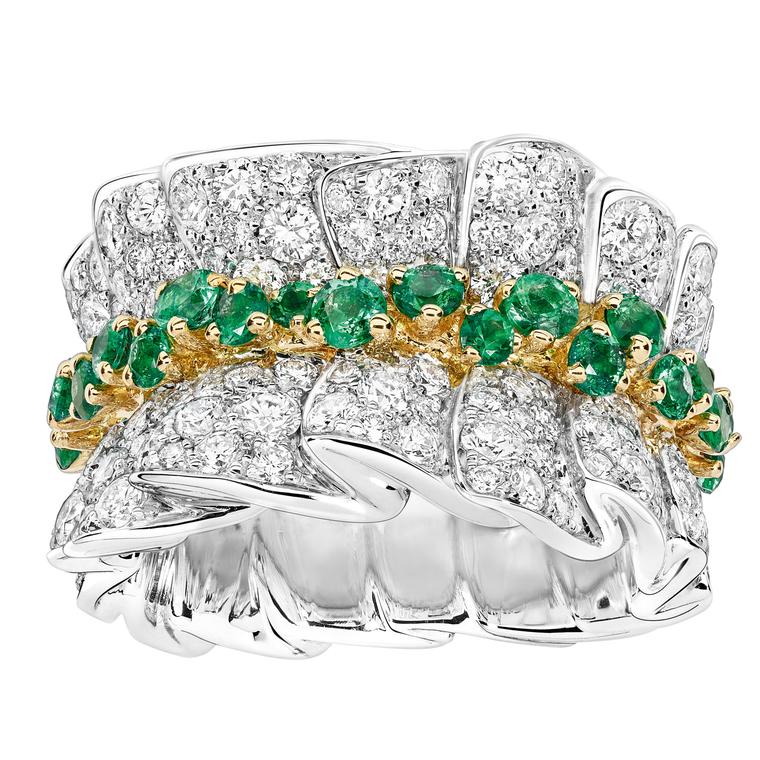 The House of Dior is indelibly associated with the elegant Parisian townhouse Christian Dior fell in love with located on 30, avenue Montaigne. From 1946 on, this elegant location, with a sweeping central staircase and countless salons, would become home to his couture label and was adorned in the majestic neoclassical Louis XVI style the designer so loved.

Dior’s new Fine Jewellery and Timepieces boutique, above, is located directly across the street from the Maison’s flagship boutique at 30, avenue Montaigne and has been designed by architect Peter Marino, with an accent on natural light, contemporary furnishings and Dior’s classic colour code of grey and pink tones. To celebrate the launch of the new boutique, Dior’s creative director Victoire de Castellane has produced special editions of some of its bestselling jewellery and watches, with a pronounced emphasis on the colour green, symbolising rebirth and renewal.

The belle of the ball is the one-of-a-kind Dior VIII Grand Bal Coquette Montaigne watch, below, which performs spectacular pirouettes thanks to Dior’s exclusive inversé automatic movement. The oscillating weight – or rotor – is placed on the dial and its graceful rotations recreate the swirling movement of a ball gown. Embellished with feathers, sapphires, amethysts and diamonds, the rotor hypnotises the spectator as it glides across the brilliant green malachite dial. Even the sapphire crystal on the caseback protecting the movement is tinted green, as is the empire green alligator strap.

The gorgeous mini La D de Dior watch, below, is also called upon for the celebrations. This Montaigne Special Edition watch comes in a 25mm yellow gold case with diamonds on the bezel and crown. Presented on a green lizard strap, the dial is decked out in luscious green chrysoprase set with four diamond hour markers.

The Archi Dior jewellery collection honours Christian Dior’s passion for architecture, a discipline that clearly influenced his haute couture creations, with the gravity-defying volumes and the daring, highly sculptural shapes of his much-touted New Look. “I wanted my dresses to be ‘constructed’, moulded on the curves of the female body whose contours they would stylise,” said Christian Dior. “I accentuated the waist, the volume of the hips, I emphasised the bust. In order to give my models more hold, I had nearly all the fabrics lined with percale or taffeta, renewing a tradition that had long been abandoned.”

Each piece in the Archi Dior jewellery collection bears the name of an iconic dress from the past. The Bar en Corolle ring, above – a direct reference to the iconic jacket of the Bar suit of 1947 and the flower-shaped Corolle silhouette – is revisited in white and yellow gold, diamonds and emeralds, while the Milieu du Siècle ring, below, glows with the green light of emeralds and tsavorite garnets, punctuated with diamonds.

In addition to the rings, Victoire de Castellane has designed a pair of white gold, diamond, emerald and tsavorite garnet earrings for the Milieu de Siècle collection, along with a stunning necklace in the same stones.