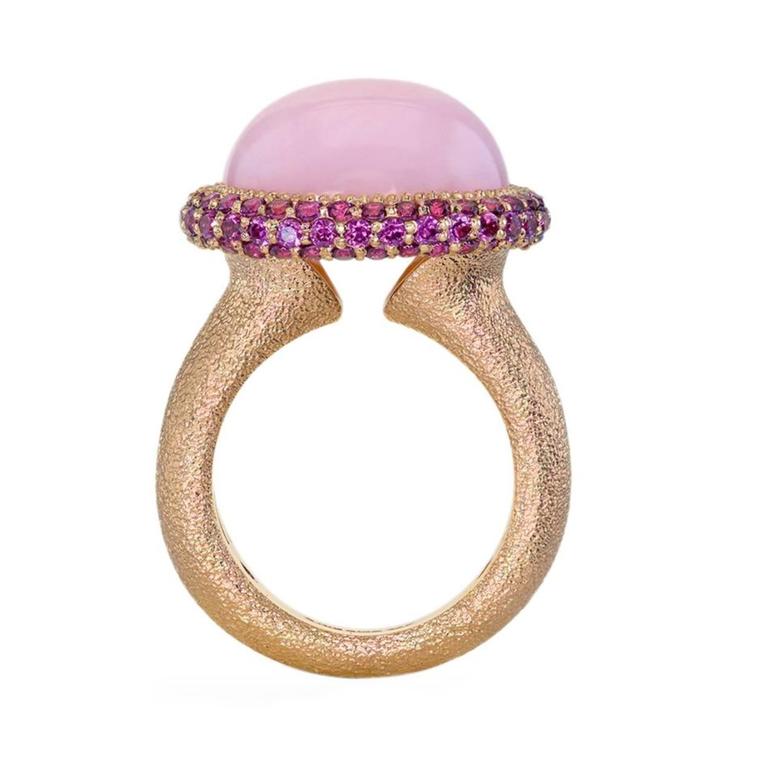 It seems like Beyoncé didn’t quite hit the mark when she berated her ex for failing to “put a ring on it” in her female power anthem ‘Single Ladies’. These days, independent women are spending their own hard-earned cash on extravagant diamond or gemstone rings and proudly flaunting them – on their right hands.

What are right hand rings?

Simply put, right hand rings are any rings that are worn on the right hand. Often the term is used for cocktail rings – big statement rings that are typically set with bold, colourful gemstones. Usually these are rings that women have bought for themselves and wearing them on the right hand is a way of ensuring that they are not confused with an engagement ring or wedding band. Often the purchase of the ring is significant too, as women may invest in a right hand ring to mark a milestone birthday, a professional achievement or even a divorce.

The best thing about right finger rings is that there are no rules. Some women choose to indulge in a diamond solitaire while others opt for a flamboyant cocktail ring or a jewel set with their birthstone. For October babies, the attention-grabbing opal rings by Australian designer Margot McKinney or US-based jeweller Alex Soldier, below, fit the bill perfectly.

While the term ‘right hand ring’ is a relatively new one, the idea of wearing a ring on the right hand to signify a woman’s economic independence has its roots in the original cocktail rings of the 1920s. As the prohibition movement swept across America, women partaking in the underground drinking scene would don brightly coloured, oversized rings that they had purchased with their own money.

Lydia Courteille’s latest collection taps into the right hand ring trend with statement jewels that feature a kaleidoscope of coloured gemstones, below. The Topkapi collection is inspired by the Turkish palace of the same name, which was home to the Ottoman sultans for almost four centuries. Located in Istanbul, the palace is now a museum and houses collections of Ottoman jewellery, miniatures, weapons shields and ancient manuscripts. Lydia says she has been fascinated with the country since she took a trip there with the French Gemmological Institute in 1986: “I love Turkey because it’s a melting pot of all kind of religion, cultures, plenty of emotions and Turkish love Occident. Wherever you go you find vestige of older civilization, it’ the “Asian Greece”, its the memory of our civilisation.”

Again, as with the style of ring, there are no hard and fast rules, although when it comes to big cocktail rings, most people tend to wear them on the right ring or index finger. With the jewellery trend for sideways stacking, it is not uncommon to see women wearing a ring (or two) on every right hand digit, from pinkie to thumb.

Traditionally, each finger had its own symbolism, with the index finger reserved for membership rings such as those bearing a family crest, and a thumb ring being seen as a sign of wealth and power. A ring worn on the right pinkie can also indicate professional status, as these rings are often presented to graduates.

How do you wear right hand rings?

In keeping with the tradition set by the 1920s flappers, in Western countries the right hand is often reserved for fun, flamboyant jewels, such as cocktail rings. As most people are right handed, wearing a statement ring on this hand will increase its visibility, making it more noticeable for other people.

With rings of a more minimal design, wearing them stacked vertically on one finger or spread across the whole hand can look very stylish. Rings that coil up the finger are also very fashionable at the moment.

Some women also choose to wear eternity rings on their right hand ring finger. These rings, which usually feature channel set diamonds in a full or half circle, are usually given to mark an occasion such as a 10- or 15-year wedding anniversary or the birth of a child. Traditionally, they are worn on the ring finger of the left hand either in between or above the engagement ring and wedding band. However, some women prefer to wear the eternity ring on their right hand either because it is more comfortable or simply because they prefer the look.

What do right hand rings mean?

In countries such as the UK and the US, where the left ring finger tends to be earmarked for love and commitment, wearing a diamond ring on the right hand makes it clear that it is not an engagement ring. The 1920s concept that a ring worn on the right hand says ‘me’ while the left hand represents ‘we’ still resonates with women today. In 2003, De Beers launched its ‘Raise your Right Hand’ campaign targeting women with enough money to buy a diamond ring for themselves. The campaign, with catch lines such as “Your left hand rocks the cradle. Your right hand rules the world”, was a resounding success, boosting sales of non-bridal diamond rings by 15 per cent.

Margot McKinney agrees that modern women tend to favour their right hand for rings that they have chosen and paid for themselves. She says: “Initially a sign of rallying against the Prohibition movement of the 1920s in the USA, I think that right hand rings are still a sign of a delicious little “I’m not playing by the rules!”

“As recently as last week I had an extraordinary woman who fell in love with a fabulous Australian South Sea pearl ring that was a perfect example of a right hand ring. She declared a long-held desire for a ring that she could wear that didn’t say “I’m married” but said I have style and taste and “I’ve made it”.

However, while a right hand ring may signify a woman’s economic independence, it can also simply mean that the jewel is a family heirloom such as an engagement ring that has been passed down from previous generations.

Instead of wearing wedding bands on their left hands, gay and lesbian couples often choose to wear rings on their right hands instead. Within their communities, these right-handed rings have become instantly recognisable indicators of relationship or marital status.

If anyone was under the impression that checking for a wedding ring on the left hand was a sure-fire way of determining someone’s marital status, think again. The tradition of wearing engagement rings and wedding bands on the left ring finger is not the same all over the world.

In many countries, such as Germany, Austria, Norway, Denmark, Greece, Russia, Spain, Colombia and Poland, it is customary to wear wedding bands on the right hand. In Brazil, Turkey, Lebanon and Syria women wear their engagement ring on the right hand until the wedding when it is switched to the left. The German tradition is the reverse of this, with the engagement ring migrating from the left hand to the right after a couple ties the knot.

There are numerous variations across the globe. In China, for example, the bride wears the wedding ring on the right hand, the so-called ‘working hand’, to signify that she is in charge of the household, while the groom wears his on the left hand.

These days the decision is often dictated by personal choice and preference as much as by tradition. For example, if a bride is right handed, she may prefer to wear the engagement ring on her left hand so it doesn’t get in the way of daily life.

However you choose to wear it, the trend for right hand rings is the perfect excuse to indulge in a spectacular jewel just for you. And if you’re in need of inspiration, our Window Shopping galleries are bursting with extravagant cocktail rings and dazzling diamond rings.