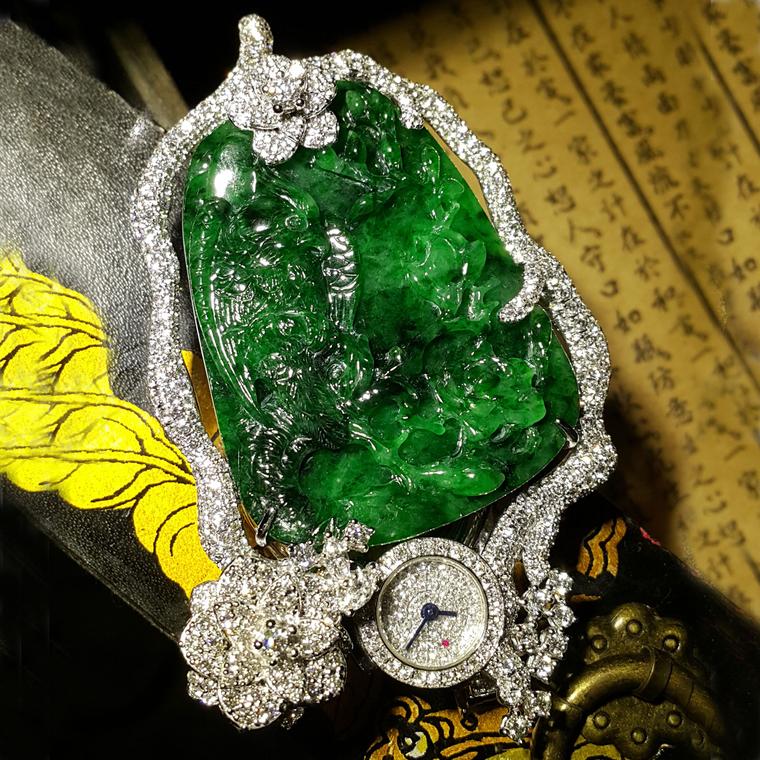 Hong Kong jewellery designer Anita So, of Osatina, dips into the past for inspiration and revives the tradition of the lorgnette, those dainty eye glasses attached to a handle used by society women in the 18th and 19th centuries at the opera, theatre and even at masquerade parties to keep an eye on the action on stage, and on members of the audience.

Anita So’s high jewellery rendition of the classic lorgnette goes well beyond adorning the frame of a pair of glasses with gems. The eyeglasses fold away neatly and are hidden from view behind a large piece of carved jadeite framed by diamonds. In keeping with the tradition of secretive glances, Anita So has incorporated a whimsical secret watch under one of the sparkling diamond blossoms.

The history of the lorgnette

Derived from the French word ‘lorgner’ – translated as ‘to eye furtively’, ‘to ogle’  or, in more contemporary language, ‘to check someone out’ – the lorgnette was a must-have accessory for ladies in the 18th and 19th centuries. Writer and 19th-century specialist Mimi Matthews dedicates a delightful article to The History of the Lorgnette on her website and describes how historical characters like Madame de Pompadour used a particular variant  known as a jealousy lorgnette fitted with a mirror in one eye, allowing them to spy on all the action going on behind their backs.

Both the models in Anita So’s collection, “Vision Art”, designed to be worn as pendants, are imbued with a rich and nostalgic Oriental spirit captured in hand-carved Burmese jadeite. In the diamond model – called “The Bird’s Secret Garden” – the lorgnette is hidden behind a crested bird sitting on a branch that has been expertly carved in the jadeite stone. The jadeite bird, below, is cradled by a naturalistic vine of diamonds and flowers, and a diamond blossom slides to one side to reveal a secret watch.

A phoenix wraps itself around the jadeite heart of the second lorgnette model, its body and tail highlighted in yellow, orange and pink sapphires to recreate its association with the Sun. Like its sister, the lorgnette glasses are tucked away behind the jadeite, and a small watch hidden amongst the plumes of the bird’s tail gives the wearer the time.

Who is Anita So?

Anita So is a jeweller based in Hong Kong who creates one-of-a-kind bespoke pieces for her clients with an emphasis on designs featuring pearls, jadeite and diamonds. A former financial regulator at the Hong Kong Securities and Futures Commission (SFC), Anita left her job in 2005 to pursue her passion for jewellery and studied gemmology and wax crafting at the GIA. Her jewellery company Osatina is gaining a reputation for its unique mix of classic Oriental themes and modern design.