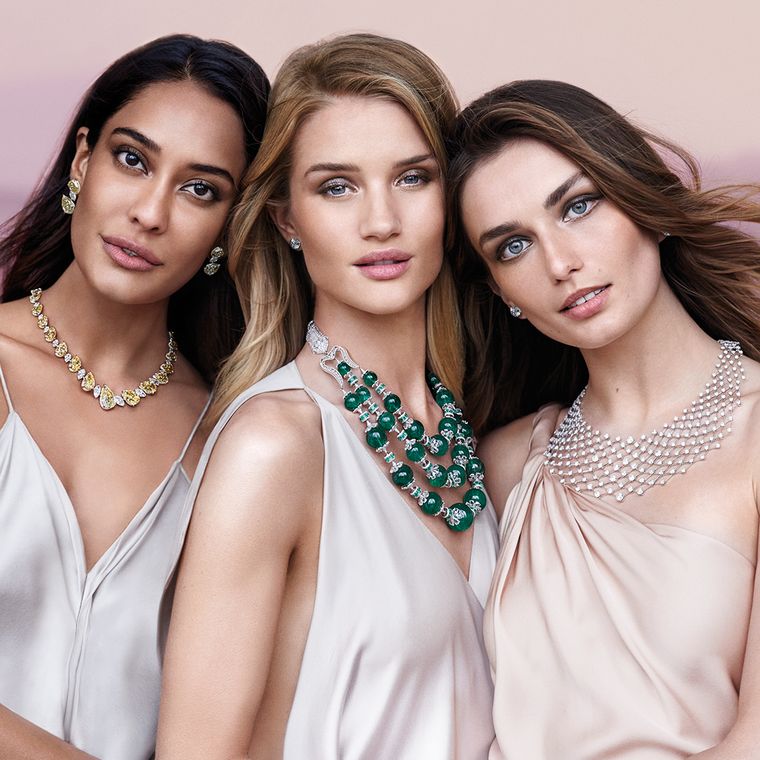 Well-known in India, NIRAV MODI is gaining an international following for its exquisite jewellery, with eight boutiques around the world, and more to come.

NIRAV MODI doesn’t do things by half measures.Though only six years old, NIRAV MODI is fast forging a presence in the luxury jewellery arena with eight boutiques in New Delhi, Mumbai, Hong Kong, New York, Macao and now London, the last six opened in the past 12 months. Rubbing shoulders with Graff Diamonds, De Beers and Van Cleef & Arpels, NIRAV MODI is setting out its stake in the big league, offering jewels with prices from a few thousands pounds to the many millions, such as the spectacular Maharani necklace below, with over 800 carats of emeralds. Its lavish presence at the Biennale des Antiquaires in Paris and the spectacular new Bond Street boutique are clear statements of intent.

Who is NIRAV MODI?

Softly-spoken founder Mr Modi thinks big. He says that the firm aims to have 100 stores around the world by 2025 and be amongst the top three largest jewellers in the world. In addition, on the way, he has created what he calls the first Indian luxury brand. Arriving in India after spending half his life in Europe, Mr Modi amalgamated his experiences of the two continents and set out to fuse the heady opulence of India with the subtle luxury of Europe.

The Modi family has been involved in diamond trading for four generations.Mr Modi is no newcomer to jewellery.  Born into a family of diamantaires in Antwerp, Mr Modi explains: “From my father’s side I am a third-generation diamantaire and from my mother’s a fifth-generation diamantaire, so it has always been conversations about diamonds at dinner – that’s what we did. We were selling high-value diamonds and from there we created the brand.” In the short time since then, the undeniable quality of its creations has been recognised by auction houses such at Sotheby’s & Christie’s, where NIRAV MODI diamonds have achieved record prices.

Don’t for a moment think that NIRAV MODI is another Indian jewellery brand trading on the country’s heritage and ethnic style of jewels. This world-class jeweller just happens to be based in India.

Having the advantage of a network of family businesses under the Firestar Diamond mark, which spans from sourcing rough to cutting and polishing, along with state-of-the-art workshops in Mumbai, Mr Modi can rightly claim a process that goes “from mine to the sublime”. Sourcing the best diamonds is but the start. The NIRAV MODI difference is in the sophisticated designs and 21st-century technology.

So while the flavour of India winks out from the diamond creations, which, with extreme detail, layer stone upon stone and unabashed opulence, this is distilled and refined jewellery, executed with the lightest of touches. And it is here that the NIRAV MODI difference comes in. The firm employs not just designers, jewellers and diamond-setters. Amongst its ranks is a cohort of engineers working out deft new ways to make diamonds float over the skin, drape across the wrist and flutter as light as a feather from the lobe.

“When we first created the brand we wanted to do something that had never been done before, with a focus on how a woman wears the jewellery with an emphasis on comfort,” explains Mr Modi. “So we put together designers, craftsmen and engineers and said ‘let’s do this together’. We gave them an inspiration and a vision, and took it from there.”

It is unusual to hear the word engineer in the world of high jewellery, but Mr Modi explains they are key to his style: “Take the Embrace jewels [above]. I gave the engineers a plastic toy bangle that stretches with rubber bands and said let’s take this into fine jewellery. It incorporates 90 moving parts and it will last for decades. That is why engineering is so important.” What other jeweller do you know who has 50 patents and 300 copyrights for diamond cuts and jewellery-making techniques?

Having such an integrated process means the team can invest a tremendous attention to detail and cut diamonds to fit the jewels. In Mumbai, 150 in-house and highly skilled jewellers work through binocular microscopes that magnify x10, working to tolerances rarely seen in the jewellery industry. Their aim: to make metal disappear, whittled away to all but the minimum, and diamonds float as if by magic. “It’s the nuances that make our jewels different. There is a lot of technology. Things that seem really simple take years to perfect.”

The house has three patented diamond cuts: the Endless cut, which in the Enigma setting creates a seamless circle of diamonds, and the petal-shaped Mughal, with their soft contours, give NIRAV MODI jewels their distinctive, feminine look. Cleverest of all, the Ainra cut transforms diamonds into chain links, making the metal disappear completely. Trademarked and patent-pending is the half-briolette Jasmine cut, above. These unusual cuts mean that a high amount of the rough is lost – 90% in the case of the Endless cut. When questioning the extravagance of this approach, Mr Modi replies: “That is beauty.”

With these techniques in its repertoire, the jewellers in Mumbai then apply good, old-fashioned graft. Two thousand hours of work can go into producing a one-off necklace, such as the spectacular Water Lilies, below, which transposes Monet’s impressionist techniques into jewels.

The ultimate test is in the wearing, and trying on the 20 carat diamond cascade Jasmine earrings, above, not only is the play of light so clean and limpid, but the earrings are as light as a cloud and move with liquid ease.  Looking at the Mughal choker, with its clever expanding track to make it sit on the neck in a crescent shape – which also transform into a circular bracelet – is to understand the obsessive levels of detail that are lavished on each jewel.The diamonds on the matching 50 carat necklace sit like dew on the skin and, so refined is the craftsmanship, that you can barely see the hand of man in its creation.

But my favourite piece is the Constellation necklace, below, with its knife-edge goldwork creating a fine mesh of diamonds that drape on the skin like silk making it a joy to wear. So flexible is the structure that 50 carats of diamonds easily fold up into the palm of your hand.

“Our focus is on your comfort – that is really important for us,” add Mr Modi. And with 70 carats of diamonds adorning my neck and ears, I couldn’t agree more, which is a very modern way to make diamonds so very wearable.