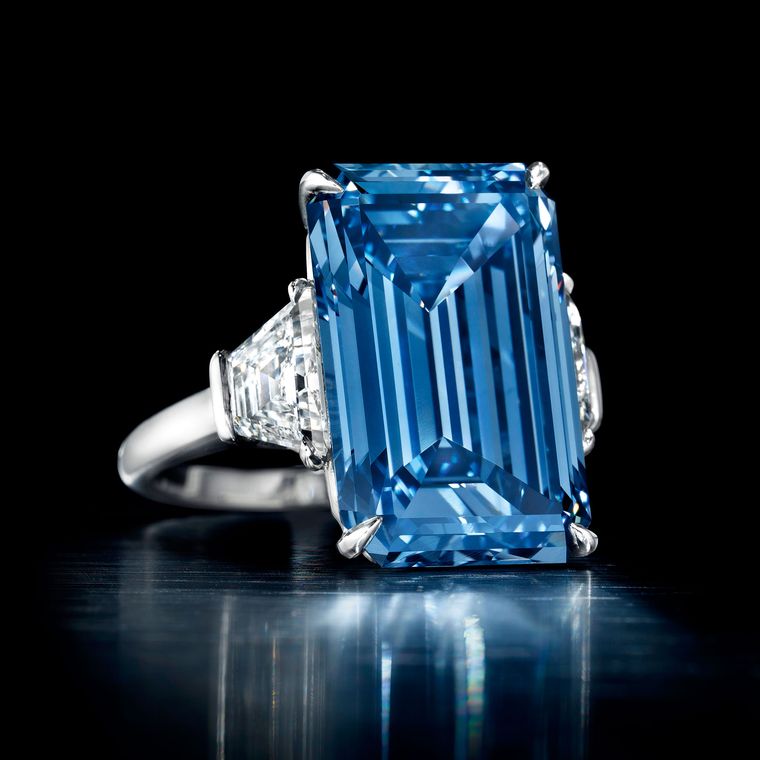 As another impressive blue diamond heads to auction this season, we look at the most expensive ring ever sold – and other worthy contenders.

2016 looks set to go down in history as the year of the blues, and we are not talking about the Tories leading the political polls, but rather some of the world’s most extraordinary gemstones. Blue diamonds have dominated the jewellery auction headlines over the past 10 months, culminating in the Oppenheimer Blue, below, becoming the most expensive ring in the world. The 14.62 carat emerald-cut Vivid Blue diamond went under the hammer for an astonishing $57.7 million at Christie’s Geneva in May this year.

The indigo-coloured gem was named after Sir Philip Oppenheimer, a member of one of the world’s most influential and powerful diamond families, who gave the ring to his wife Pamela.  The stone is believed to originate from the famous Cullinan mine in South Africa and was set into a ring by renowned jeweller Verdura in the 1990s. The Oppenheimers controlled the De Beers Mining Company and, as head of the London-based Central Selling Organisation, Sir Philip oversaw the diamond sales cartel for 45 years until 1993.Flanked by two trapeze-cut white diamonds on a platinum band, the centre stone was described by Christie’s as “the gem of gems”.

The final selling price comfortably exceeded the pre-sale estimate of $38-45 million to make the Oppenheimer Blue the most expensive ring in the world. It also quashed the previous record set by the pink diamond ring bought by legendary jeweller Laurence Graff in 2010 for $46.2 million. Immediately after the auction at Sotheby’s Geneva, the 24.78 carat diamond, pictured below, was renamed The Graff Pink. At the time, Mr Graff said the emerald-cut Fancy Intense pink gem was “the most fabulous diamond” he had ever laid eyes on in his 35-year career. Set into a platinum ring flanked by two shield-shaped white diamonds, the Graff Pink was previously owned by American jeweller Harry Winston.

The largest Fancy Intense blue diamond to ever appear at auction, this beautiful rectangular mixed-cut stone is set onto a platinum ring with baguette-cut diamond side stones. Like the Oppenheimer Blue, the Cullinan Dream, below, comes from the South African mine of the same name and is the largest of four gems cut from a 122.52 carat rough blue diamond unearthed in 2014.Completing our trio of the most expensive diamond rings ever sold at auction is the 24.18 carat Cullinan Dream, which went under the hammer for $25.4 million at Christie’s New York in June.

As we head into the autumn auction season, there are plenty more treats in store for gem connoisseurs all over the world. This week saw the unveiling of another spectacular blue diamond at Sotheby’s London. Named The Sky Blue Diamond in honour of its entrancing blue colour, the 8.01 carat Fancy Vivid blue diamond, below, is set onto a ring signed by Cartier. Describing the gem, David Bennett, Worldwide Chairman of Sotheby’s International Jewellery Division, said: “The Sky Blue Diamond is of a wonderfully clear celestial blue, presented in an extremely elegant square emerald cut – in my view, the most flattering of all the cuts for a coloured diamond. This important gem will, I am sure, captivate all collectors of exceptional gemstones.”

Watch our exclusive video in which Maria Doulton talks to David Bennett, Worldwide Chairman of Sotheby’s Jewellery Division, about the Sky Blue Diamond.

The jewel will be the top lot at next month’s Sotheby’s Geneva Sale of Magnificent and Noble Jewels, where it is expected to fetch in the region of $15-25 million. While this latest blue diamond is unlikely to challenge the Oppenheimer Blue’s position as the world’s most expensive ring, it could nudge the Cullinan Dream out of the top three.

It also once again highlights the continuous strong demand for high-quality coloured diamonds. Blue diamonds are among the rarest in the world, accounting for a tiny 0.0001% of all gems mined around the world. The numbers are further whittled down by the fact that only around 1% of these stones display the colour tone and saturation that allow them to be classified as Fancy Vivid. Pink diamonds are also extremely rare, with only 50 or 60 top-quality gems appearing on the market each year. These blush-coloured beauties frequently fetch between 20 and 40 per cent more per carat than the equivalent white diamonds.

With the Sky Blue Diamond kicking off what looks set to be another colourful jewellery auction season, we look forward to feasting our eyes on many more spectacular and potentially record breaking gems.